This is the story of a small town Pennsylvania soda pop bottler that time forgot. It’s a story more than 100 years in the making; of family ownership, pride, highest quality old-style recipes and a love affair with sparkling glass and crisp crown caps.

This is the story of the Natrona Bottling Company, and how they captured magic in a glass bottle.

The Natrona Bottling Company was founded back in 1904 by a man named Ed Welsh. When Welsh passed away, his son took over the operation, but it wasn’t long before he sold the business. And like a hot potato, when the next owner passed away, his widow sold Natrona Bottle Works to John & Paul Bowser in 1939.

And it’s been in the Bowser family ever since.

John originally purchased the company with the intentions of becoming a Dr Pepper bottler, but at the time, Dr Pepper (which was fast becoming a southern staple) wasn’t ready to expand as far north as Pennsylvania.

In the meantime, Natrona Bottle Works (which later became the Natrona Bottling Company) started to bottle in 12 oz bottles with an ACL label. Prior to that, the company had been bottling in 6 oz. glass. The pop was branded ‘Red Ribbon Beverages’ (a name that was pulled out of the air bearing no significance to anything at the time).

Shortly after Red Ribbon hit the local marketplace, World War II was declared and all the plans that had been made for the new brand were instantly changed.

Sugar rationing altered the soda pop bottling business and even glass bottles were in short supply. The company survived the war years and shortly after they got into a beverage they named ‘Red Ribbon Chocolate’, a sterilized chocolate milk-based drink that tasted like chocolate milk but because it contained powdered milk, didn’t need to be refridgerated.

Red Ribbon Chocolate, made with top-notch ingredients (including Hersey syrup) and a specially-made recipe, turned out to be a popular Pennsylvania drink, representing nearly half of Natrona Bottling’s business at the time. In its pique, nearly 25 bottlers in the state were handling the distribution.

But it wasn’t a drink that was destined for immortality.

As time went on, gas prices started to increase - which caused problems since steam was used in the sterilizing process - and created higher gas bills in the process. Coupled with sky-high cocoa prices and the government getting into the milk business, Red Ribbon Chocolate survived less than 20 years.

John passed away in 1976 and that left his brother Paul as the president and CEO of the company - a position that he still holds, some 30 years later.

In the late 1970s, Bowser enlisted the expertise of pop aficionado Sidney Harris, who had already spent decades in the beverage industry peddling ‘Tom Tucker’  Beverages around the Pittsburgh area.

Together, Bowser and Harris shifted production at Natrona Bottling Company to focus more on specialty beverages... unique concoctions that they didn’t have to fight the big two soda makers for market share. They introduced ‘Champayno’, a non-alcoholic sparkling beverage that looked and tasted every bit like the real stuff, but without the added kick.

Bowser says that at the time, Champayno, bottled in a 750mL bottle complete with gold foil wrap and stopper, was a hit with consumers and it looked like a million bucks. “Harris said to me, ‘you know, that gold decoration of ours is just like a Christmas tree, and you put the lights on. Up until then if you don’t have the decoration on it, it’s just an evergreen in the forest. When we put our stuff out, it’s throwing the switch - the lights come on...’ and he was right,” Bowser says.

Harris passed away three years ago at the age of 100, and Bowser says that up until Harris was in his late 90s, he was still out calling on accounts and working with Bowser.

Red Ribbon Cherry Supreme is the company’s best seller, followed by Champayno, especially, Bowser says, during the holiday season. “Starting next month, Champayno will be the big item - but that’s a celebration item mainly.”

More recently, Natrona also produces a smaller version of the Champayno bottle perfect for holiday gift baskets and if you’re lucky enough to order a case of small Champayno bottles, you’ll get it delivered in an old wooden case with the ‘Red Ribbon’ name emblazoned on the side.

And how does Bowser compete with Coca-Cola and Pepsi in an age of discount pricing, high tech machinery and computer-controlled inventory? “I run from them... I don’t want any part of them,” he says defiantly.

“We’re in the Mercedes class and they’re in the Chevy class. They’re out doing volume and pricing - we don’t. Ours is handmade and it costs more. We come in at the specialty end of the field. We make these items that nobody else wants to make,” Bowser says.

And at the heart of the upper echelon of the pop business is the glass bottle. “Everything that you can name is better in glass,” Bowser says. “Did you ever see a bottle of perfume that’s worth $100 packaged in plastic? You get the shelf life out of glass, you don’t get any of this plastic aftertaste out of glass. Everything that’s good is in glass.”

But what happens when the 110-year-old glass manufacturing company you get your bottles from suddenly declares bankruptcy? That’s what the Natrona Bottling Company faced last year when Glenshaw Glass Co., located about 3 miles north of Pittsburgh, was forced into receivership.

“They made quality bottles,” Zdila says. “We brought in everything that we could use before they closed up when they were liquidating. This last load of 20 oz. bottles had to come in from the state of Indiana, so the freight is a killer.”

Near the end of 2005, a federal bankruptcy judge approved the $3.8 million sale of the assets of the idled Glenshaw Glass Co. to an investment group that is planning on ressurecting the glass plant. At the present time the new owner has estimated that the plant will be operational again in early 2007 with about 100 employees.

When Bowser says that their Natrona products are handmade and cost more, he’s not kidding. All of the pops Natrona bottles are made with real cane sugar, the way soda pop was meant to be flavored. There’s no cutting corners in the name of the almighty buck.

“These other boys are using high fructose corn syrup which is about a fourth of the cost of cane sugar, so they’re undercutting the cost,” Bowser says.

The bottling line, labeling and packaging of Natrona pops is all done and controlled by human interaction. If there’s a computer to be found on the premises, it’s likely confined to the office.

At first glance, the old bottling equipment looks ancient - because in the world of the high volume pop business, it is. A local Coca-Cola or Pepsi bottler wouldn’t be caught dead with equipment that was brand new in the 1950s. But Bowser wouldn’t have it any other way. “There’s some of this machinery still around. I’m not saying we’ll be using it forever, but as long as you have someone mechanically inclined and you’ve got the machine shops and things around, you can probably get by,” he says. “There are a few of them still around in the country, and it gets the job done.”

Zdila agrees. “So far we’ve been fortunate to be able to have parts machined - so far so good. Sometimes instead of making it out of metal you’re making it out of plywood to work with it. It doesn’t look like much, but it’s surprising how all of this works.”

Not to be discounted, Bowers says, is the fact that much of Natrona’s Champayno beverage is produced one by one as it comes off the bottling line. “When we make Champayno, there’s a lot of that work done by hand along the line and these new machines would go so fast you couldn’t make it on that type of a machine. Nobody could keep up with it.”

These days the bottling line doesn’t run everyday like it did in the days of less cut-throat competition - during a time, Bowser says, when the big two cola companies would leave a crumb on the table for the little guy. No more, he says... with Coke and Pepsi virtually cornering the market with colas, spin-off flavors, juices, bottled water, and now flavored water.

At one time, Bowser says Natrona Bottling employed a shift-and-a-half with the bottling equipment humming constantly from 6 in the morning until 8 at night but now, with a reduced inventory on hand, the company only bottles when it has orders to fill.

That’s not to say the company isn’t interested in expanding their products, or boosting sales.

Enter John Nese, from Galco’s Old World Market in Los Angeles, California. Eleven years ago, Nese turned his love of soft drinks into a flourishing business that carries hundreds of obscure beverages from soda pop, beer, and tea, and everything in between.

Ironically, Nese’s family originally came from Punxsutawney, Pennsylvania and once he tried the Natrona Bottling Company samples that Bowser sent to him, he eventually became one of Natrona’s biggest accounts and now stocks most of their specialty beverages at his California shop. And product rolls out of Natrona Bottling destined for Galco’s by the truckload.

Bowser says he’s toying with the idea of bottling a new flavor or two that would be exclusive to Galco’s if he can perfect the right formula.

Currently Galco’s is carrying a version of Natrona Bottling Company’s ‘Jamaica’s Finest Ginger Beer’. The difference between the version that Natrona sells in its local distribution area and the one that shows up on Galco’s shelves in California is the hotness factor. Jamaica’s Finest Ginger Beer at the Galco’s shop is ‘hot hot hot’... as in rip your throat out, throw it on the ground, and stomp on it ‘hot’.

The ginger beer in the Pennsylvania area is a much tamer version, and the clientele like it that way in both parts of the country respectively.

Looking to the future, one day at a time

Bowser recognizes that he isn’t in a place in his life where he’s hell-bent on becoming Number One or going up against the big cola companies head to head.

And at 82 years of age, who could blame him?

“I’m not 18 anymore so I’m not looking too far into the future,” he says. But remarkably, Bowser has no plans for retirement. “Hell no... I’m happy to be here. I’m no golfer, I’m no fisherman, I’m no hunter, what am I gonna do? So I’m just happy to do what we’re doing. We get people that are calling from everywhere and telling us how much they like our products - it sort of gives us a little lift here... we’ve got something here that somebody wants. ”

Magic in a bottle at Natrona Bottling Company 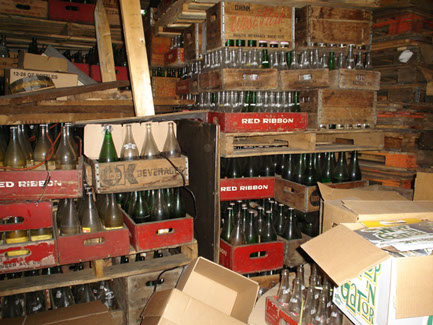 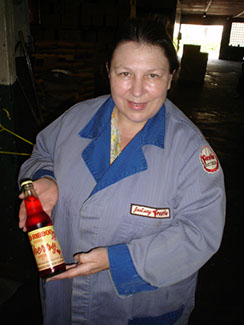